The following is a tale of how one programmer learned the basics of decorators in Python and is told from his point of view.

So, my boss told me to write two functions both of which return whatever they accept. Well, that seems pretty easy:

Okay, that should not be too difficult:

Let's try them out:

Cool, they seem to work pretty well. But it bothers me that those assertion lines seem exactly the same and I am not following the DRY principle. Uncle Bob will kill me. I think I should probably factor them out to a separate function and call where needed. The function should accept an argument and a type and check if that argument is an instance of that type. If not, raise an assertion error:

Now I can call this in the two functions that I wrote earlier:

Looks much better now and they are producing the same results. Hmmm, I have a strange feeling that I could improve this further. It is Python after all. There should be something more pythonic. As Raymond Hettinger would say: 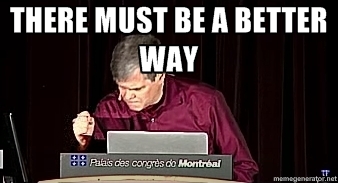 There must be a better way!

I need to do a little research on how I can accomplish this feat.

Oh wow! I watched this amazing talk by James Powell and learned that there is a feature in Python that does exactly what I want to do with my functions and it is called decorators

This is all very mysterious to me but let's see what result it will yield:

Okay, the expected result. Let's try to understand what is going on here:

Now, it is much clearer to me. Back to my own functions.

Using these decorators, I want my end result to look like this:

It means that our decorator will have one more layer which will accept the type as parameter and will have two inner functions. Let's try to write that decorator:

Cool! And now I can use this decorator as I wanted:

and run some tests:

Voila! It is working as before but now the functions are much better-looking. They are even hot

Wow! I could not even imagine that I would learn so much more than just the decorators.

Along the way, I learned that functions are first-class objects in Python which means that I can use a function as arguments to another function:

I also learned that functions can have inner functions:

And most importantly those inner functions can use the variables from the outer functions and can remember them even when they go out of scope (clojure), like in the following line:

where type comes from the function above.

Overall, it was a productive day

Thanks for reading thus far. This post was not written to illustrate what exactly decorators are or how they work. But rather, it was written in order to show why we need decorators and how they can improve our code. That's why, in order to make your decorators knowledge comprehensive, please go ahead and read the theseblog posts for details. They are awesome!

P.S. There is the complementary video that I have made on Python Decorators :)