In this blog post, we will look at Python GIL, Threads, Processes and AsyncIO.

Let's say that we want to write a function that takes a number as an argument and simply counts down. Pretty easy:

Let's call this function with a big number and measure how much it takes:

On my machine, it takes 8.54 seconds. Now, let's call it twice and measure that:

It takes around 18.4 seconds on my machine. Wait, WHAT? It not only did not take as much as calling the function once but in fact it was even slower than calling the function twice without Threads. Try that with Python2.7 and you will get even worse results. A prominent software developer, David Beazly reported that it even took almost 2x time in his talk Inside the Python GIL.

Please, welcome the notorious GIL - Global Interpreter Lock. This guy is to blame for all the problems in the world. GIL allows only one thread to run at a time. In the above example, when we thought we were using two threads, we were only using just one, because the big boss GIL did not allow us to. That's why, it did not run faster. But, why was it even slower? That's because every now and then Python tries to switch Threads as we asked him to use two. GIL does not allow him to do so. However, when he tries to switch to no avail, there is some overhead associated with it. Thus, the end result is even slower.

We all know that Threads can be a good thing and help us make our programs run much faster. Why does the GIL exist, then? Damn you, GIL! You are like Negan from the Walking Dead. 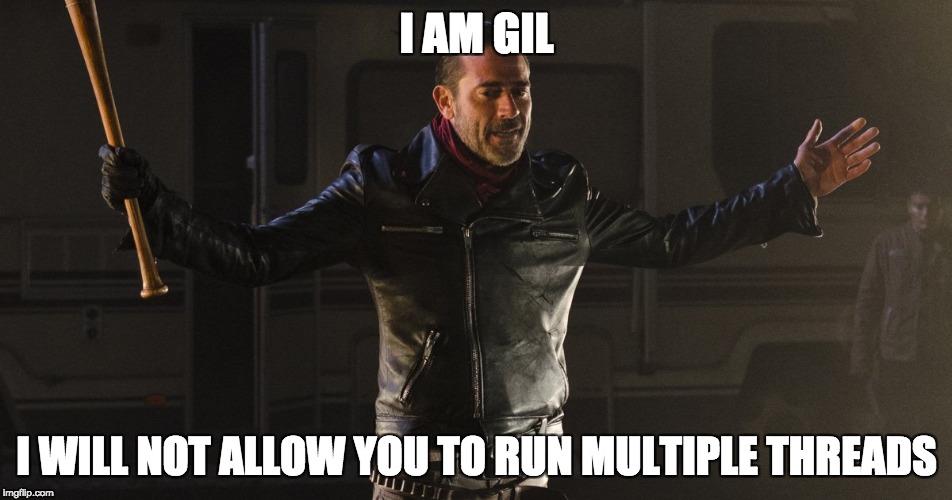 Well, it turns out GIL is not the villain after all. Actually, GIL is the good guy. It turns out that Python's memory management is not thread-safe! That is, if you run multiple threads, your program may behave in weird and even catastrophic ways. GIL is there to help us from such scenarios. 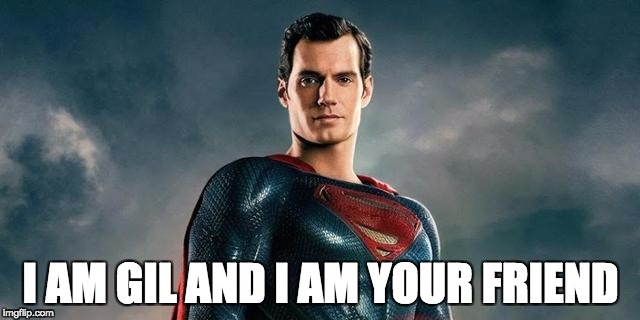 But, wouldn't it be easier to remove the Thread class instead?

Excellent question! Instead of writing an additional tool that would prevent Threads from doing bad things to our programs, why not just delete the Thread classes so that programmers simply won't be able to use them? We are not allowed to use them anyways.

Turns out, there are some cases when Thread can be of use. All above examples were CPU bound, meaning that they need only CPU to run, they wait on CPU. However, if your code is IO bound or image processing or NumPy number crunching, GIL won't be in your way as these operations happen outside the GIL. That's where you can use the Thread class safely and effectively.

Let's write some IO bound function. A function that requests a web url and returns its content as a text:

Calling this function once with the argument https://google.com takes 0.88 seconds on my machine. Calling it twice - 1.72 seconds, of course. Now, let's call it twice in different threads and see the Thread's effect:

It takes 0.89 seconds. Hooray! Calling the function twice in different threads took as much as calling it just once. Once again, it worked because our function was IO bound. The same thing did not work above when the function was CPU bound.

There is a catch

Each thread takes some additional memory and thread switching takes some time. Although it is not a lot, it adds up when you have thousands of threads running. Think gigabytes of extra RAM and at least 5% of CPU time spent only for context switching.

In order to solve this, Python developers came up with the asyncio library. Basically, it has its own event loop to control the execution of functions in an asynchronous way inside a single thread. If Threads were controlled by the underlying OS, asyncio knows when to switch tasks with the help of some keywords written by developers themselves. That's right! You get to decide when to switch. Let's convert the above example to use asyncio:

Note that we are using aiohttp instead of requests because it is an asynchronous http library. Without going into the details, what this code does is define an async function (aka coroutine) and call it 5 times with some id (just to illustrate asynchronicity). Output would be something like this:

Note that ids are not in the order they were called, meaning that the tasks were switched when they encountered the keyword await. We get the same results as using Threads but asyncio uses less overhead and you control the switching process.

Although this does not explain the details of asyncio, I hope it at least explains why it is useful.

Okay, now that we dealt with IO bound tasks, let's go back to our first CPU bound problem.

There is still hope for CPU bound tasks!

Turns out there is multiprocessing.Process class in Python which offers similar functionality and interface to the Thread class. The difference is that it uses sub-processes instead of threads. That's why, it won't be blocked by the GIL. Awesome! Let's try that out with the above examples. As I said, it offers a similar interface to the Thread class and thus we will just have to replace Thread with Process and we are done:

It took ~8 seconds on my machine. That is as much as it took when we called the function just once. Cool! Try adding one more process and it will still take the same time. That is awesome! However, do keep in mind that processes run in a separate memory space thus can't share data with each other, whereas, threads can.

Also keep in mind that we are talking about the CPython here. Other implementations such Jython and IronPython don't have GIL so they can use Threads. If you don't know what Jython or IronPython are, refer to this post of mine.

Thanks for reading and make sure to leave a comment if you have any questions.