Have you ever been frustrated when your Django application did not find the static files you were using? Then, you read the documentation and played around with all those settings variables and after a couple of hours it was finally fixed. However, you had no idea what you just did. I have been in this situation so many times that I decided to write this post where I explain everything you need to configure your static files in a Django application.

The first thing you need to know is that static files are stored at $APP/static/ where $APP is an application name:

These are usually static files such as css and javascript files that are related to that $APP.

You can also tell Django to look for static files in some arbitrary locations of your choice. You use STATICFILES_DIRS for that:

These are usually static files that are not related to any app that you have in your Django application.

Now, keep in mind that these different folders are where you store your static assets DURING DEVELOPMENT. When you deploy your app to the production, you want to configure your web server (e.g. NGINX) to look for static files in one single location rather than multiple paths. How do you collect all your static files from different apps to a single folder? As simple as this:

However, this will throw an exception because it does not know where to collect the files yet. You need to tell it by setting the STATIC_ROOT setting:

Now run that command and all you static files will be collected to allstaticfiles folder in your project root: 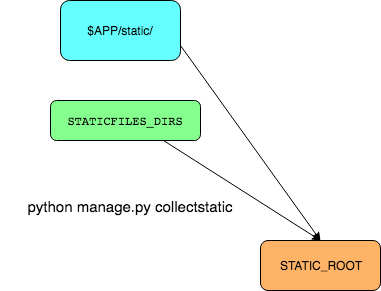 Again, you DON'T PUT any static file in STATIC_ROOT. That's where files get collected automatically after you run collectstatic.

Now, in production, you can configure your web server to serve static files from that location. In NGINX, it would look like this:

And the last piece is to set STATIC_URL to your STATIC_ROOT so that when you do {% static 'main.css' %} in a django template, it uses the allstaticfiles folder in production.

Again, STATIC_URL is set to static during development and to STATIC_ROOT in production: 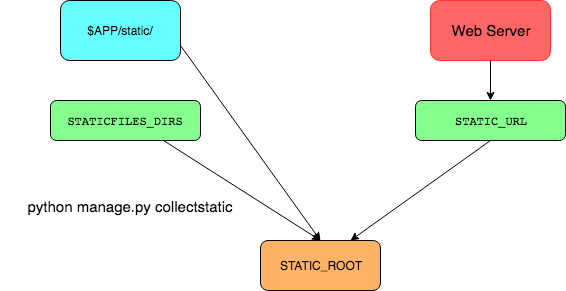 I learned this while attending DjangoCon Europe 2018 and thus all credits go to Curtis Maloney who presented this in a lighting talk. It made my life easier and I hope it does the same for everybody else.